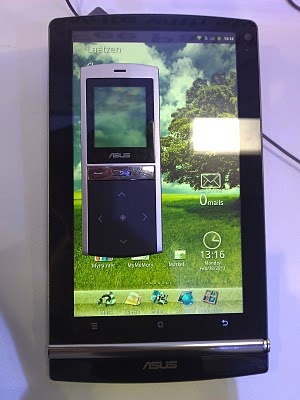 Asus introduced a line of tablets at CES in January, and now with CeBIT kicking off in Germany this week the company is showing the same devices… but with more details. For instances, we already knew that the 7 inch Asus Eee pad MeMo would ship with a dual core Qualcomm Snapdragon processor, Google Android 3.0 Honeycomb, and some sort of a wireless device for controlling phone and media functionality — but now Asus is showing off the Bluetooth extender.

Jkkmobile and CarryPad both have hands-on videos with the tablet, showing the new Bluetooth handset. Basically the tablet will have cellular capabilities, but instead of holding the 7 inch tablet up to your head to make phone calls, you’ll be able to use the Bluetooth handset while the tablet is in your bag.

The Bluetooth accessory also has buttons for controlling media playback and other tablet functions.

The Asus Eee Pad MeMo also stands out from the tablet crowd thanks to the fact that it’s designed to support finger and stylus touch input — although you need to use a special stylus with a rubbery tip which comes with the tablet.

You can check out jkkmobile’s  hands-on video showing the new handset after the break. You can also find my video from January taking a look at the Eee Pad MeMo sans the handset.