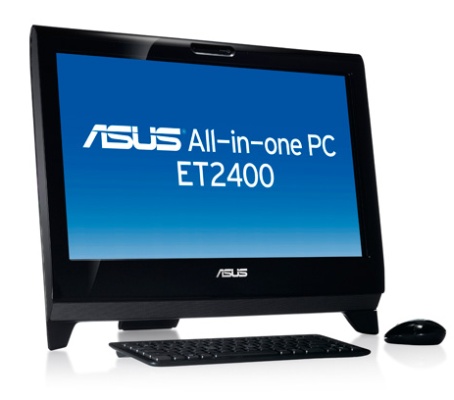 There was a time when I was starting to wonder if Asus was planning on changing its name to Eee. The Eee PC was the first line of successful netbooks to launch, and the company followed up with the Eee Box line of tiny desktops (nettops), Eee Top all-in-one PCs, the Eee Videophone, and the Eee Slate and Eee Pad tablets.

But now it looks like the company is starting to realize that some of these products are not like the others, and it’s moved the All-in-one PCs to a separate section of the company web site. The Eee branding also appears to be gone. Instead, you can find information about the latest all-in-one PCs under listings for the ET20xx line of desktop computers with built-in 20 inch monitors, and ET2400 line with 24 inch displays.

The ET2010NT still has netbook-like specs including an Intel Atom D510 dual core processor and NVIDIA ION graphics. But some of the newer models such as the ET2011E pack more powerful components including a choice of an Intel Core 2 Duo or Pentium Dual Core processor.

The ET2400 computers have 1080p HD displays and come with more powerful Intel Core i3, i5, or i7 chips and optional Blu-ray drives.

It never really made much sense to me to include a line of desktop computers with large displays that take up a fair amount of desktop space in the same category as your cheap ultraportable netbooks. Asus seems to agree, since the company’s newest all-in-one desktops aren’t just more powerful than a netbook or nettop, they’re also much more expensive, with price tags running as high as $1700 or more. It’s good to see that Asus has finally decided to reclassify these machines.