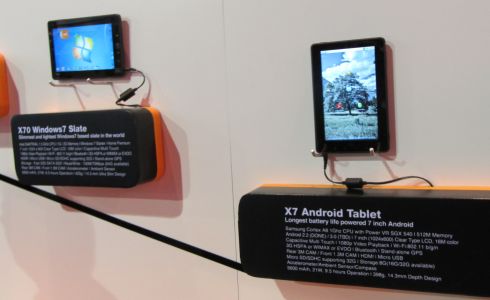 I got a chance to heck out some of the new tablets Viliv introduced last week at CES. The X70 is Windows 7 Slate is an update model of the current X70, with fewer buttons and a shiny new Intel Atom Oak Trail processor (which means it won’t be available for purchase for a little while), while the Viliv X7 is a 7 inch Android tablet.

The Viliv X70 Windows 7 Slate has a 7 inch, 1024 x 600 pixel display and a 1.5GHz Intel Atom Oak Trail CPU. It will be available with 1-2GB of RAM and Windows 7 Starter or Home Premium. It has a capacitive multitouch display,802.11b/g/n WiFi, Bluetooth, and 3G connectivity, as well as HDMI output and support for 1080p HD video. It comes with a 32GB SSD and a 5600mAh battery which Viliv says should provide up to 6.5 hours of run time.

One of the most unique features is a capacitive touchpad built into the side of the case, letting you move an on-screen pointer much as you would with a mouse or touchpad. 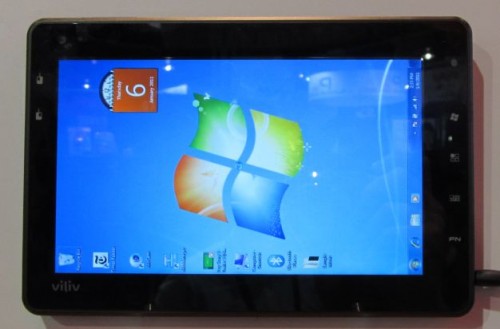 The demo unit I got to check out was stuck on a wall, so I couldn’t check out things like how it handles screen rotation. But it had a nice, clean looking design with a couple of capacitive touch button above and below the screen, unlike the current Viliv X70 line which is covered with push-buttons. The tablet weighs 0.92 pounds. 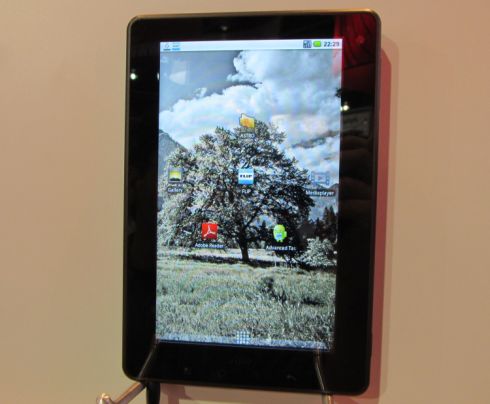 The Viliv X7 looks almost identical on the outside, but instead of Windows-specific touch buttons below the display it has the usual Android Home, Menu, and Back buttons.

On the inside, the X7 has a 1GHz Samsung Cortex A8 processor, 512MB of RAM, a 7 inch, 1024 x 600 pixel capacitive multitouch display, 802.11b/g/n WiFi, Bluetooth, 3G or WiMAX, front and rear cameras, and Google Android. Right now the tablet is running Android 2.2 Froyo, but an Android 3.0 Gingerbread update is scheduled.

In my brief hands-on, this tablet seemed to be one of the most responsive I’ve used, but I didn’t get to spend that much time with it.

3 replies on “Up close with the new Viliv X7 Android, X70 Windows slates”