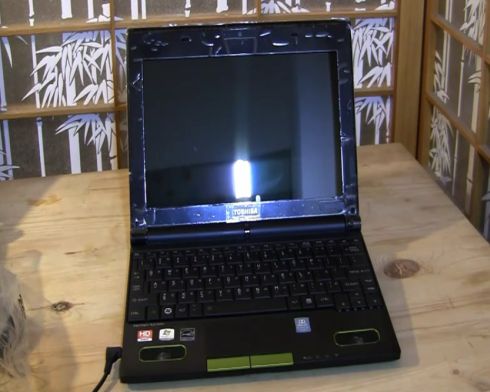 The Toshiba NB550D netbook isn’t expected to ship in the US, but Nicole at Netbook News managed to pick one up in Taiwan. The little laptop is one of the first computers to ship with an AMD C-50 dual core processor and Radeon HD 6250 graphics, but that’s not its only claim to fame. It also has Harman Kardon speakers built into the palm rest (with a tiny subwoofer on the bottom of the computer).

Nicole has posted an unboxing video and while she hasn’t benchmarked the performance of the CPU and graphics yet, she does demonstrate a nifty feature: You can use the speakers even when the computer is turned off. Just plug in an audio source such as an MP3 player or other portable device, and you can use the netbook like a kind of bulky, expensive set of portable speakers. Still, the best mobile devices are the ones you already have with you, and if you plan to carry the netbook around with you anyway, it’s nice to know that you don’t also need to pack speakers in your bag (if you’re the sort of person who’s likely to do that).