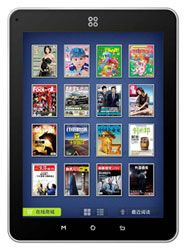 We’ve seen plenty of 7 and 10 inch Android tablets over the last few months, but few tablet makers have attempted to take on the Apple iPad on its own turf with a 9.7 inch, 1024 x 768 pixel display. But that’s exactly what the Smart Devices SmartQ-R10 does. It even has an IPS display thrown in for good measure (and excellent viewing angles).

But unlike a lot of iPad clones, the SmartQ-R10 actually has a row of Android-specific buttons below the screen for Home, Menu, and Back functions, which is a good thing, because the R10 is designed to run Android 2.1, not the upcoming Android 3.0 Honeycomb which drops the reliance on buttons.

On the down side, this tablet is no iPad in terms of specs. It has a resistive touchscreen display, a 720MHz ARM11 Telechips TCC8902 processor, 256MB of RAM, and doesn’t seem to be all that responsive or perform all that well with 3D graphics. It also has just 2GB of storage — although there is a microSD card slot for expansion. The R10 also has a high capacity 7500mAh battery, which is pretty impressive for a device that manages to weigh just 1.7 pounds.