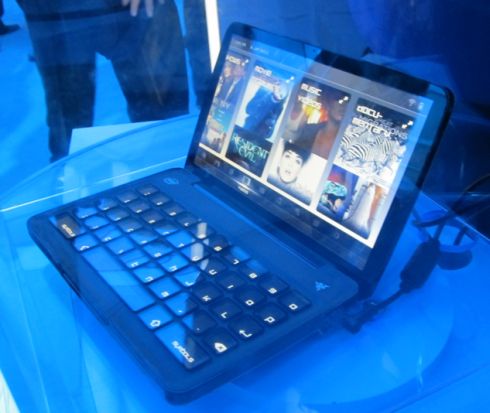 Razer has announced plans for a new mobile gaming device called the Switchblade which features two 7 inch multitouch displays. The bottom display is touch-sensitive, and can be used as a keyboard and trackpad — and the layout can change depending on the game you’re playing and the actions you’re performing. For instance, if you’re playing an RPG, you can have special keys appear for accessing your inventory, quest log, or other information.

The lower touchscreen actually has raised plastic keys to provide a tactile touch experience. There aren’t any working units yet, but I ran across a prototype running a demo video at the Intel booth today.

The concept actually looks pretty cool, but I’m a bit worried about the fact that it’s powered by an Atom processor. Even the highest performance Atom chip isn’t really up to snuff for playing bleeding edge games (although adding a graphics cards such as NVIDIA ION certainly helps). On the other hand, I’d hate to think of the battery life of a 7 inch dual display device with a more powerful CPU.

You can checkout a brief video from the show floor as well as Razer’s demo video after the break.