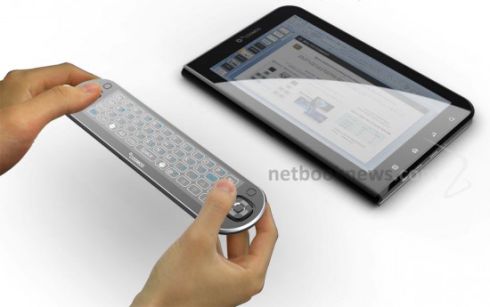 Ocosmos is expected to launch a small gaming machine with an Intel Atom Oak Trail processor and Windows operating system this week. The company has been showing off a demo unit for a little while which looks like a cross between a phone and PlayStation Portable, but the folks at Netbook News got their hands on some new photos which show a radically different design. It’s not entirely clear if this is the device we’ll see later this week, but it certainly looks like an interesting concept.

While the original device had a slide-out keyboard (or rather, a slide-up screen), the new images show 9 inch tablet-style computer with a wireless keyboard/game controller. The larger screen will definitely make games look better on this device, but a 9 inch, two piece device seems a bit cumbersome for gaming on the go. The Oak Trail processor is also an interesting choice, since it will provide long battery life, but poor graphics and CPU performance, which means you’ll probably be best off playing casual games or older titles.

According to Netbook News, the tablet has a 1024 x 768 pixel capacitive touchscreen display, a 1.5GHz Oak Trail processor, 2GB of memory, a 32GB or 64GB solid state disk, 802.11b/g/n WiFi, Bluetooth 3.0 and GPS. It has front and rear-facing cameras and USB and microSD ports.

There’s no word on the pricing or release date — and since these images look like renderings rather than photos, I’ll be interested to see what Ocosmos actually brings to CES this week.

You can find more images at Netbook News.