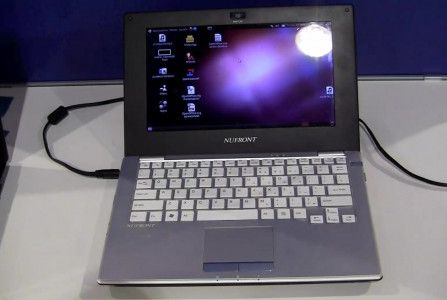 Microsoft Windows may not be available for ARM-based processors (yet), but that doesn’t mean you can’t run other operating systems on laptop or desktop computers with ARM chips. We’ve already seen a number of Android-based netbooks, and in years past I’ve seen plenty of mini-laptops with low power ARM chips and light weight Linux distributions or Windows CE. I suspect that we’ll see plenty of additional ARM-based laptops once Microsoft follows through on its promise to launch a version of its OS for ARM.

In the meantime, as ARM chips get more and more powerful, it’s likely that we’ll see a growing number of Android and Linux-based netbooks that can handle tasks from pumping out 1080p HD video over an HDMI connection to running desktop office software.

A company called Nufront demonstrated a new 10 inch laptop at CES this week which paints a pretty good picture of just what’s possible in this space. The computer has a 2GHz ARM Cortex-A9 processor and runs Ubuntu Linux. It has VGA and HDMI output, an SD card slot and 2 USB ports.

The laptop looks thin and light, has a decent sized touchpad and keyboard, and should get pretty good battery life thanks to the low power chipset, even with a 3 cell, 24Whr battery.

The Nufront machine is still just a prototype and it’s not clear if or when it will come to market or where it will be available. My guess is that we won’t see a lot of Linux-based systems sold in the US. But it’s good to see what’s possible.

You can check out two hands-on videos after the break, thanks toNetbook News and ARMDevices.