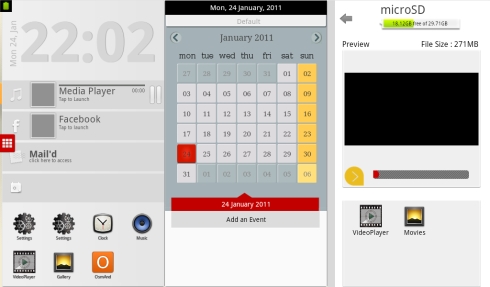 The ViewSonic gTablet is a 10 inch Android tablet with a 10.1 inch, 1024 x 600 pixel display, a 1 GHz NVIDIA Tegra 2 dual core processor, and Android 2.2 operating system. In short, its specs aren’t all that different from the Notion Ink Adam tablet which recently started shipping. The gTablet just doesn’t have an optional Pixel Qi display, rotating camera, or Notion Ink’s custom Eden software interface. As it turns out, that may be a good thing, since some earlier customers are having problems with the Eden software — but if you want to throw caution to the wind and try the Eden UI on a ViewSonic gTablet, now you can.

Xda-developers forum member Roebeet has ceated custom firmware for the gTablet which includes software taken from the Adam’s firmware. It’s a full replacement for the gTablet software, which means it will erase all of your data. You should backup your data, and think about what you’re doing very carefully before you get started.

That said, the custom ROM is designed to give you root access with support for Google applications, Adobe Flash Player, and other tools, as well as the Notion Ink Eden custom user interface which includes a highly customized application launcher and a home screen which consists of 3 “leaves” at a time, showing stripped-down version of full apps such as a calendar app, email app, and file explorer.

Update: You can check out a video after the break.