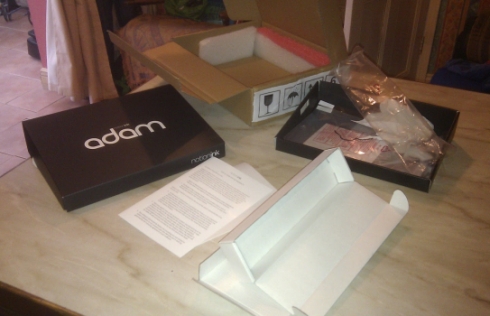 OK, it may officially be time for Notion Ink Adam tablet enthusiasts to exhale. After hitting a public relations roadbump or two in the  pre-order process, the company started shipping pre-orders last week. And they’re starting to arrive. UK resident Shane Trafford is one of the first folks to receive one, and he’s sent some unboxing photos to the Notion Ink Fan website.

Yes, there are still reports of some users having trouble getting Notion Ink to honor a discount promise. And yes, we’re still waiting to see detailed reviews of the tablet in terms of overall performance, build quality, and battery life. But it looks like we can officially say the tablet isn’t a scam.

I was pretty sure of that already — especially after spending some time with a production unit at CES and talking to Pixel Qi founder Mary Lou Jepsen, who confirmed that Notion Ink had placed some significant orders of the company’s sunlight-readable displays. But it’s still nice to see the tablet actually shipping.

Trafford says it was a bit tricky to install the matte screen protector, and it took about 20 minutes to install a software update after tunring on the tablet.

The Notion Ink Adam tablet features a 10 inch, 1024 x 600 pixel display, a 1GHz dual core NVIDIA Tegra 2 processor, and runs Google Android with a custom user interface designed for tablets. The device has a camera which is designed to swivel 180 degrees allowing you to use a single camera as both a front and rear-facing camera. Notion Ink offers the Pixel Qi display as an option, as well as a choice of 3G enabled or WiFi-only tablets.

Update: There’s now a video available… and a warning. Some users are reporting that the software update is causing problems, with the update failing to fully download. You can check out the video below.

Update 2: If you “bricked” your Adam tablet when trying to install the software, Notion Ink Fan has instructions for getting it up and running again.