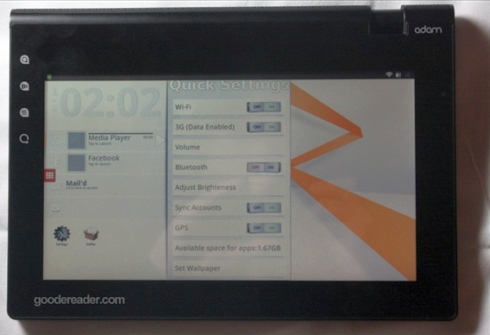 The Notion Ink Adam tablet news continues to roll in. The 10 inch Android tablet started shipping recently and we’re seeing a lot of happy and not-so-happy users posting their initial impressions. Now the folks at Notion Ink are promising to accept more orders soon, preload the latest software updates to prevent problems some early customers have been having, and to release details about the next-generation Adam tablet soon. It’s expected to launch in about 9 to 15 months.

In other news, Good eReader is one of the first sites to post an in-depth review of the Adam tablet. The good news is that the site thinks the hardware is top notch, with excellent build quality, a good camera, and a fast NVIDIA Tegra 2 dual core processor. The reviewer also suggest that while the screen attracts fingerprints, he’s not detecting any glare — which directly contradicts reports from some early customers. I suspect the glare issue is going to be open to interpretation… and lighting conditions.

The reviewer also seems very impressed with the battery life. Although it doesn’t sound like he’s had the tablet long enough to perform extensive tests, he’s been streaming HD video and audio to a television, using the tablet for about 16 hours so far and battery life is still at about 45 percent. I’m hoping to see more battery life estimates from other users soon — run time on this type of device will likely vary widely depending on how you use it.

As we’ve been hearing from users, the software is another story. Good eReader says that some apps simply don’t work right now. Some issues can be easily fixed. For instance, if you update the time and date settings, you should be able to login to Facebook — something many users have been having trouble with. But many of the bundled applications feature cut-off navigation or title bars which can cause problems. The Genesis Market also isn’t up and running yet, which means there’s no easy way to download and install third party apps designed specifically for the Adam tablet — although as some users have demonstrated, you can sideload apps and even install alternative app stores if you like.

Overall, it sounds like the biggest problems with the Adam tablet appear to be software-related. And that’s great news, because it’s much easier to update the software on a product once it’s already shipped than the hardware.

17 replies on “Notion Ink Adam tablet reviewed, Adam 2 due in about a year”