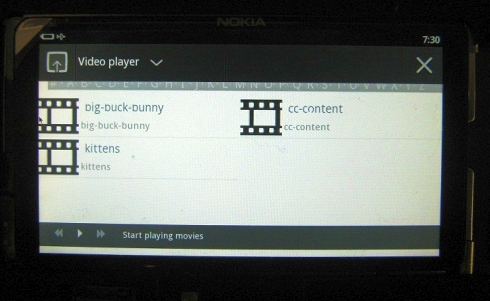 The folks at the Mobile-Review forum have dug up an image of a new portable device from Nokia running the MeeGo Linux operating system. There aren’t many details at this point, and it’s not clear if this is an early image of an actual product that will soon ship or just a test platform that Nokia is using internally. But it certainly doesn’t look like any existing Nokia phone.

The logo is in the center of the bezel instead of off to the side, and the bezel is thinner than on most Nokia smartphones. Based on the pictures, it appears that this little guy is probably the size of a (very) large smartphone with a 4 to 5 inch display rather than a 7 to 10 inch tablet like the ones all the cool kids seem to be clamoring for these days.

But as smartphone screens get bigger and bigger, the lines between phones and tablet continues to blur. The fact that MeeGo is designed to run on phones, tablets, netbooks, and other devices certainly doesn’t hurt the line-blurring either.

Update: As David points out in the comments below, the devices looks a lot like the ST Ericsson reference design shown off recently. That could mean the unnamed Nokia device is powered by a dual core ARM Cortex A9 processor with 1080p HD video support. But it could also just be a test device which Nokia may never bring to market.

via My Nokia Blog

One reply on “Nokia MeeGo tablet (or phone) prototype spotted in the wild?”