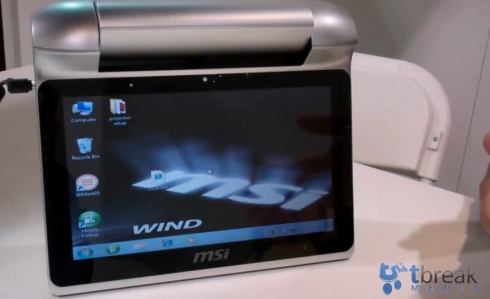 Last year MSI showed off a Projector PC concept device that effectively packed a full-fledged desktop computer into a video projector case. Oh yeah, it could also project images and video onto a screen, wall, or other surface. The initial Projector PC never made it to market, but this year it looks like MSI has decided to take the concept mobile with a tablet version.

tbreak media got a chance to check out the prototype at a recent event. It looks like someone just crammed an MSI WindPad 100W windows 7 tablet into a plastic shell with a projector at the top. The device looks a bit cumbersome to carry around, but as prototypes go, I’ve certainly seen less attractive gadgets.

The projector is placed in a swiveling piece of plastic, allowing you to rotate the projector 180 degrees or more so that it can point at a screen behind the tablet or aim down at a tabletop in front of the tablet. An MSI rep says that you could theoretically project a virtual keyboard onto the table this way, although the company hasn’t developed working software that would let you type on the keyboard yet (although other companies have shown that the technology can work to some degree).

There’s no word on whether the new tablet projector prototype will ever make it to market. But it’s certainly an interesting concept that I could see making some headway in the enterprise market.

MSI’s tablet with projector from Tbreak Media on Vimeo.