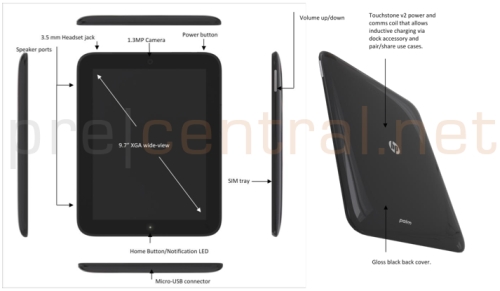 HP is expected to officially introduce a webOS tablet (or two) at an event on February 9th. But the company can’t seem to stop leaking documents which are stealing a bit of thunder from that upcoming announcement. Today’s leak come courtesy of PreCentral, which managed to snag a spec sheet and some more photos of a new 9.7 inch webOS tablet code-named “Topaz.”

The Topaz tablet will apparently have a 1.2GHz dual core Qualcomm MSM8660 processor, a 9.7 inch, 1024 x 768 pixel IPS display with a capacitive multitouch panel, 512MB of RAM, 16GB to 64GB of storage, and a non-removable 24Whr battery. It will reportedly support 802.11b/g/n WiFi and Bluetooth and have optional support for 3G and GPS connectivity.

PreCentral also has information about a new TouchStone wireless charging and HP’s new cloud services which include web-based storage space and integration with web-based services for streaming photos, music, and other media.

Update: PreCentral also has a leaked document showing some of the elements of the user interface including a virtual keyboard, multitouch gesture support, and pop-up dialog boxes.