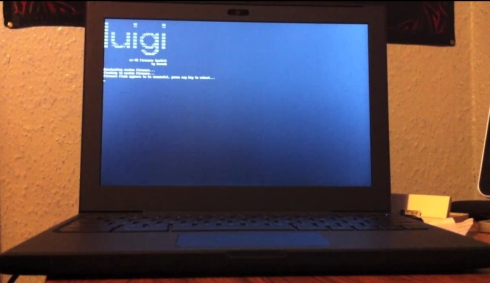 We’ve already seen that it’s possible to install Windows, OS X, or other operating systems on Google’s Cr-48 Chrome OS notebook. Now an independent developer by the name of Hexxeh has published a utility that makes the process pretty simple.

I find this kind of funny, because Hexxeh has made a name for himself by releasing tools that let you install pre-release versions of Chrome OS on non-Google hardware. Now that a Google Chrome notebook is actually available (for about 60,000 people who got in on the beta test), he’s making it easy to replace Chrome OS (although to be fair, it’s just as easy to dual boot Chrome and another OS).

Hexxeh’s latest tool is called Luigi, and basically it replaces the firmware on the Cr-48 with an alternate version that lets you plug in a USB flash drive or DVD drive and boot and install virtually any operating system that supports the laptop’s Intel Atom processor. Luigi also lets you revert to the standard firmware if you decide you want to go back to the original settings — which might be a good idea, since using Luigi will likely prevent your Cr-48 from downloading any Chrome OS updates that Google sends out.

You can check out a video of Luigi in action after the break. I have to warn you… it’s about as exciting as watching a computer boot, but it’s there if you want to see it.