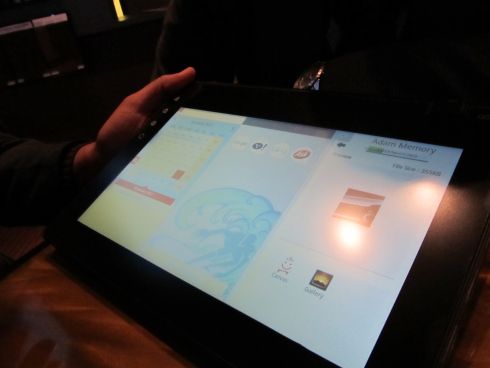 It’s been a year since an unknown company from India called Notion Ink introduced the first Android tablet to feature a Pixel Qi display and NVIDIA Tegra 2 processor. Over the past year the company has been busy developing software, tweaking the hardware design, and doing everything else it takes to turn a hand-carved wooden prototype into an actual product that’s ready to ship. And the Adam tablet is finally ready to ship, with the company saying that the first units should go out to customers the week of January 11th.

This evening I got a chance to catch up with Notion Ink and take a look at the final unit. While the tablet will be available with or without the low power, sunlight readable Pixel Qi display, the demo unit I saw had the Pixel Qi transflective display. Interestingly, while the company had originally said that the screen would add a bit of thickness to the tablet, it turns out that the tablet has the same dimensions whether you get the Pixel Qi screen or not.

The display actually has a glossy finish, but Notion Ink provides a matte screen cover which gives the tablet a nice non-glare look.

Aside from the Pixel Qi display, there are a few other things that really set the Adam apart from other Android tablets. First, it has a single camera that swivels 180 degrees, allowing you to use it as a front or rear facing camera. It’s a much more innovative solution than the twin cameras found on many other tablets.

Second, the tablet has USB host capabilities, allowing you to plugin USB flash drives, a keyboard, mouse, or other peripheral.

But probably the most unusual thing about the Adam tablet is its software. 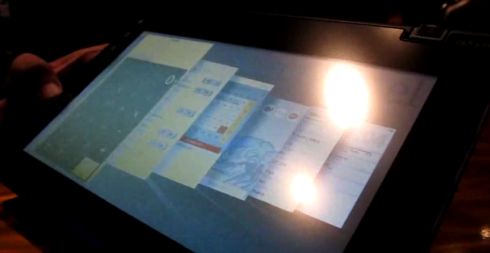 Long before Google announced its Honeycomb version of Android which will be optimized for tablets, Notion Ink figured out that Android 2.x was an imperfect experience on 10 inch touchscreen tablets.

The company has developed an overlay for Android called Eden, which replaces the typical home screen widgets, shortcuts, and status bar with a series of panels, or “leafs.” Each leaf can be a separate application, and you can switch between apps by scrolling left or right — or you can bring up a 3D app switcher to cycle through running applications.

Most of these apps can also be run in full screen mode, providing additional features where available. For instances, an email Leaf might just show a message list, while the full screen app could show message titles on the left and details on the right. Notion Ink has launched a developer program to build a base of apps that users will be able to download and install from the company’s Genesis app store.

The tablet will not ship with access to Google’s Android Market. But it will be able to run third party apps if you sideload them. There’s also nothing preventing you from installing a third party app store like SlideMe or Amazon’s upcoming Android app store. But apps that aren’t developed specifically for the platform won’t work in Leaf mode. When you try to open them from Notion Ink’s custom app launcher, you’ll get a message saying you can open it in full screen mode.

As we’ve seen with other large screen tablets, many apps written for Android 2.x simply weren’t designed to run on devices with 1024 x 600 pixel displays, so it makes sense for Notion Ink to push its own development platform. Now that Google is getting ready to officially support tablets though, I have to wonder if this small company from India that generated so much buzz last year is going to be able to continue to attract developers when big name companies including Motorola, Toshiba, LG, and Asus are expected to launch Honeycomb tablets.

That said, like the Adam’s Eden UI, Google Android Honeycomb will support application that run in dual-pane modes, which Notion Ink says could make it very easy for the company to transition from Android 2.x to Android 3.0 and take advantage of optimizations coming from Google. Right now the Adam tablet runs Android 2.2, but the company is already working to update the software to Android 2.3.

Unfortunately I won’t have a review unit for a while — Notion Ink is sending out everything it has to paying customers first. But you can check out my hands-on video with the tablet below.

21 replies on “Hands-on with the Notion Ink Adam tablet”