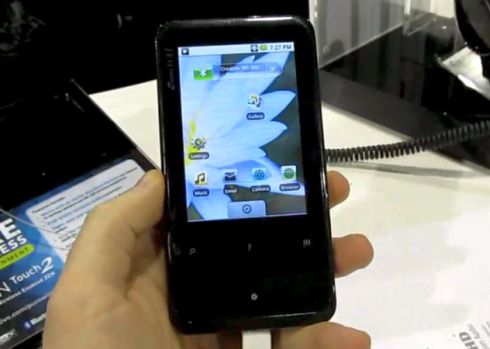 Google’s Android operating system is showing up everywhere. What started out as a smartphone OS is powering tablets, notebooks, and portable media players like the Creative Zen Touch 2. While I could certainly see some folks eying this little media player as a way to try out Android without actually buying a phone and signing up for a data plan, I have to say I wasn’t that impressed with the demo model I tested this week at CES.

On the one hand, the little guy has support for a wide range of media codecs including WMV, MP4, H.264, FLAC, and OGG Vorbis, and offers up to 25 hours of run time when listening to music. It also has FM Radio and GPS options. On the other hand, the build quality isn’t all that great.

The Zen Touch 2 has a resistive touchscreen display, which means you’ll need to either use a fingernail or stylus to control the device, or press pretty firmly with a fingertip. The device also has a strange button layout, with capacitive buttons just below the display for search, back, and menu, as well as a large button below those which you have to press pretty firmly to return to the Home screen.

The handheld tablet doesn’t come with access to the Google Android Market, but you may be able to install third party apps manually. The Creative Zen Touch 2 has a 3.2 inch, 480 x 320 pixel display, 802.11b/g/n WiFi, Bluetooth 2.1, a 2MP camera, and runs Google Android 2.1.

The Zen Touch 2 is available from Amazon for $190

, which makes it a bit pricier than the Archos 32 which similar in many respects, but the Zen Touch 2 has more features including a higher resolution display and a built-in mono speaker.