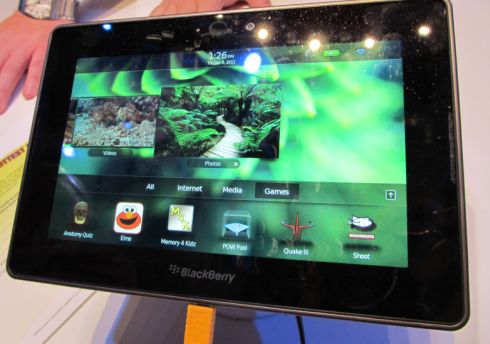 I got my first chance to play with RIM’s BlackBerry PlayBook today, and I have to say… it’s nice. While the world may need another tablet-specific operating system like it needs a hole in the head (does the world have a head?) the PlayBook UI is nice and while not 100% intuitive, you can learn to swipe and flick your way through menus in a matter of seconds. 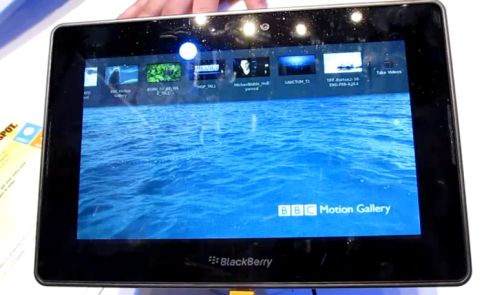 When you want to end a program, just pull up the app launcher, tap the program you want to kill, and flick it toward the top of the screen. While most mobile operating systems offer a sort of limited multitasking support, where apps that aren’t in the foreground go into a suspended (or partially suspended) state, the PlayBook actually continues running apps in the background while you’re using another app in the foreground. In the video below you can see live previews of both a video game and a video playing at the same time. I’m not entirely sure why you’d want to run both of those things at once, but it’s impressive that you can.

While the UI and core apps are quite impressive, it will be interesting to see whether RIM can attract developers to the platform. Without the apps to back up the core software, the tablet will be of limited use — although if you’d offered me a portable media player with a 7 inch display, dual core processor, speedy web browser, and HD video capability a few years ago and told me that was all it could do, I would have been pretty impressed.

RIM also had a display case filled with cases for the PlayBook. I imagine these are just the first of many accessories we’ll start to see as the launch date (whenever that is) approaches.

One reply on “Hands-on with the BlackBerry Playbook”