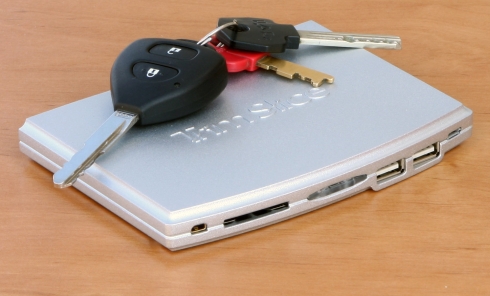 The folks at CompuLab have been putting out ridiculously small desktop computers for a while, including the Intel Atom (and now AMD Fusion) powered line of Fit PC devices. But the company is branching out a bit with its latest. The CompuLab Trim Slice drops the x86 processor altogether for a 1 GHz NVIDIA Tegra 2 dual core ARM Cortex A9 processor.

The little computer comes with 1GB of DDR2 memory and a SATA solid state disk with support for up to 64GB of storage (plus full sized SDHC and micro SDHC card slots for expansion). The Trim Slice also packs 802.11n WiFi and Bluetooth, supports HDMI 1.3 and DVI video and 5.1 channel S/PDIF audio. There are 4 USB 2.0 ports and a serial port.

Since the computer is powered by an ARM-based chip, it’s not going to run Windows 7, but you should be able to install Google Android, or any number of Linux-based operating systems that support ARM architecture. The computer could be used as a media player, gaming system, or even a desktop PC with the right software.

There’s no word on pricing yet, but CompuLab promises the Trim Slice will be cheaper than a typical tablet. The computer will go on sale in April.