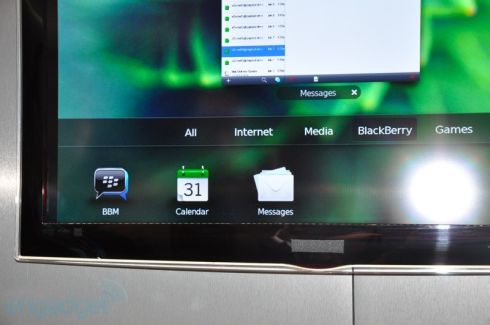 Research in Motion’s BlackBerry platform is probably best known for the way it handles email and messaging. But at launch, the BlackBerry PlayBook 7 inch tablet won’t have a native email, BlackBerry Messenger, or Calendar app. Instead, it will rely on something called BlackBerry Bridge which synchronizes data for those apps with a BlackBerry phone over a Bluetooth connection. This will let Bridge users interact with mail, messaging, and calendar apps on the larger PlayBook screen — but it does nothing for anyone who wants to pick up a PlayBook who doesn’t have a BlackBerry phone because if the BlackBery phone isn’t within range, you won’t even see those apps.

Considering how much buzz the PlayBook is getting, this seems kind of silly. It was truly one of the most interesting tablets I saw at CES this year, and it would be an excellent standalone tablet which would appeal to plenty of iPhone, Android, Symbian or Windows Mobile users. But at launch, Engadget reports, it simply won’t have some of the most basic services unless you also use a BlackBerry phone.

That said, it sounds like the company is planning on developing native calendar and messaging apps “as the platform evolves,” or maybe allowing third party developers to fill in the gaps. It’s not entirely clear at this point.

8 replies on “BlackBerry PlayBook to launch without native messaging apps”