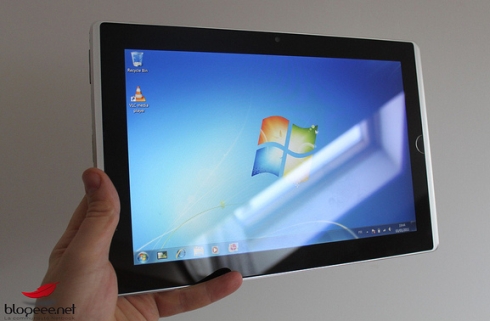 Asus officially unveiled the Eee Slate Ep121 Windows tablet with a 12 inch capacitive touchscreen display and a Wacom active digitizer at CES earlier this month. But before the show even began, Blogeee’s Pierre LeCourt got his hands on a pre-release unit. Today he’s posted some more unboxing photos and detailed impressions of the $999 tablet.

The machine stands out from many of the tablets expected to hit the market in the coming months in a few key ways. I’ve already mentioned the screen, which may seem a bit large at a time when 7 to 10 inch tablets seem to be all the rage. The active digitizer for optional stylus input will also help with handwriting recognition, drawing, and hover/mouse-over controls. The tablet also has an Intel Core i5 processor, a dual-core chip which packs much more punch than the ARM-based chips found in many tablets, and it runs Windows 7 Home Premium. Oh yeah, it also has 2GB of DDR3 memory, a 32GB or 64GB SSD, and more connectivity options than you can shake a stick at including HDMI output 802.11b/g/n WiFi, and bluetooth.

All those features definitely explain the relatively high starting price — but the EP121 is actually rather cheap compared to the Windows tablets of yesteryear.

Blogee’s unboxing photos also provide a pretty good look at the relatively compact power supply, the not-so-compact Bluetooth keyboard, and the carrying case that comes with the tablet. Overall the tablet an accessories seem to be very well designed. Unfortunately they’re not particularly light weight.

Pierre weighed each component. The tablet alone weighs about 2.6 pounds, making it a bit heavy to hold in one hand. Things get a lot worse if you decide to throw the tablet, keyboard, case, and power adapter in your bag — something you’re likely to do given the estimated 3 hour battery life. The whole kit and kaboodle tops that scales at just under 5 pounds.

Sure, you can still find laptops that weigh more than that, but the EP121 could be the heaviest mobile device to wear the Eee name when you take all the accessories into account.

You can find more details and a ton of excellent photos and videos at Blogeee.