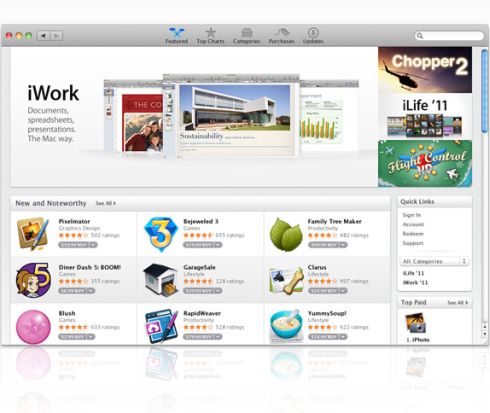 Appla has flipped the switch on its new App Store for Mac computers, in an attempt to make finding, purchasing and downloading software on OS S as simple as it is on iOS… but more expensive. While the iPhone App Store is notorious for the huge number of 99 cent apps, Mac apps are priced much higher, with Pages, Keynote and Numbers apps from iWork going for $19.99, photo software Aperture running $79.99, and even the new OS X version of Angry Birds selling for $5, or about 500% more than the iOS version.

Angry Birds, by the way, has already shot to the top of the sales charts.

In order to use the Mac App Store you’ll need to update to OS X Snow Leopard 10.6.6. At launch, there are more than a thousand apps available in the App Store.