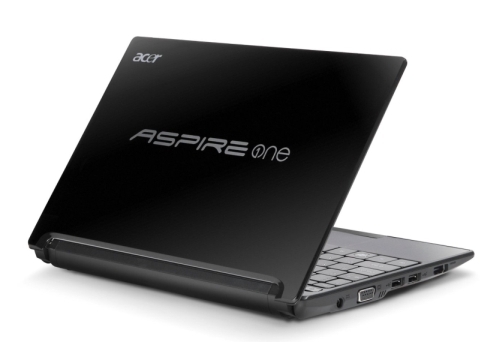 Over the past week or so we’ve seen plenty of notebooks with 18W AMD Zacate chips announced, but the Acer Aspire One 522 is one of the few new computers to ship with AMD’s lower power 9W Ontario chip. More precisely, it will have a 1GHz dual core AMD C-50 processor with built-in Radeon HD 6250 graphics. And it’s up for pre-order now from Amazon.

Aside from the shiny new processor, the rest of the specs are pretty typical netbook fare including Windows 7 Starter Edition, 1GB of DDR3 memory, a 250GB hard drive, 802.11b/g/n WiFi, a 1.3MP camera and 3 USB 2.0 ports, plus a 6 cell, 4400mAh battery which Acer says should provide up to 6 hours of run time. But unlike most netbooks, the Aspire One 522 also has an HDMI port, since it can handle 1080p HD video output.The laptop is also expected to have a 1280 x 720 pixel HD display.

The laptop weighs about 2.9 pounds.