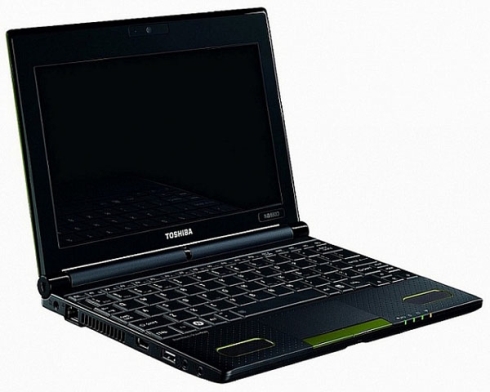 I expect to see a fair number of laptops sporting shiny new AMD Fusion chips including the low-power Ontario and Zacate processors at CES next week. But someone at Toshiba Germany apparently didn’t feel like waiting, and went ahead and published a product page for a new model called the Toshiba NB550D with a 1GHz dual core AMD C50 (Ontario) chip.

The 10 inch mini-laptop features AMD Radeon HD 6250M graphics, Harman Kardon speakers, a 6 cell battery which is reportedly good for up to 9.5 hours of run time, HDMI ouput, 802.11b/g/n WiFi, Bluetooth 3.0 and the netbook-standard 1GB of RAM and 250GB hard drive. The machine runs Windows 7 Home Premium and will be available in green, orange, or brown.