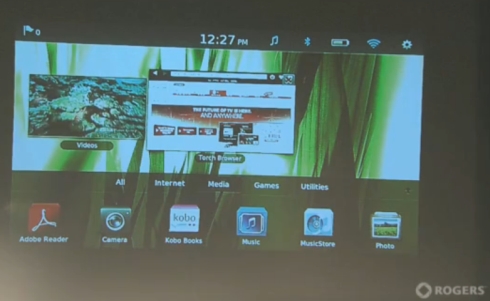 Research in Motion’s BlackBerry PlayBook tablet won’t be ready to ship until next year, but the company has been showing off early prototypes at every opportunity. Last week Canadian wireless carrier Rogers announced it would be working with RIM to offer the PlayBook, and the folks at Electronista found some video showing the tablet in action.

As we’ve seen before, the tablet can multitask circles around other low power tablets, for instance running 1080p HD video in the background while you’re surfing the web in the foreground. I can’t think of a lot of reasons you’d want to do that, but the zippy 1GHz dual core CPU and graphics acceleration features in the tablet can handle it.

In the beginning of the video below, you can see the HD video playback and application switching features. You can also get a sense of some of the different kinds of gestures you would use to interact with the tablet. Honestly, it looks like someone took the application manager from webOS and slapped a bit of Google Android over the top. But that’s not necessarily a bad thing.

Rogers TabLife TO video: RIM’s David Neale on the new BlackBerry PlayBook and the tablet sector from Rogers Buzz on Vimeo.