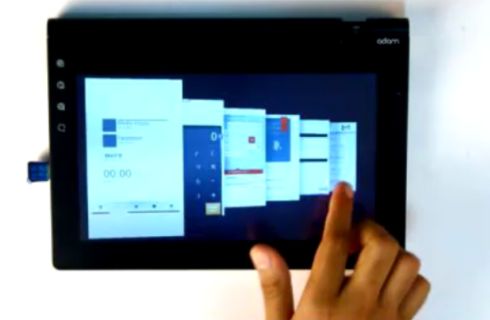 Notion Ink came under a bit of fire last week for a less-than perfect pre-launch event for the company’s much anticipated Adam tablet. On paper, the tablet looks like the best thing since sliced bread… or at least since the iPad, thanks to its NVIDIA Tegra 2 dual core processor, optional Pixel Qi display, reasonable price tag, rotating camera, and custom software stack. But some have questioned whether Notion Ink is on the straight and narrow, or if the product is even real, while others acknowledge that it would be difficult for a small startup from India to launch a product of this sort without at least a few roadbumps.

In order to help clear things up, Notion Ink founder Rohan Shravan has put together a demo video of a production version of the tablet. The video was first sent to Android Police, one of the web sites that first raised questions about the company after Notion Ink started taking pre-orders. The video will also soon be available at the Notion Ink blog, or you can check out the YouTube embed below.

Among other things, the video shows the Adam tablet running multiple applications simultaneously — with a custom user interface allowing you to actually see multiple windows at the same time — something that most Android devices won’t allow. That’s because of Notion Ink’s custom “panel” driven user interface that essentially lets you run three apps on the same screen, such asn email ap, file browser, and weather widget.

You can also launch applications such as the map application in full-screen mode, and there’s a program launcher bar which you can pull up which zooms out to the middle of the screen.

The software seems very responsive, and the video shows multitouch gestures such as pinch to zoom and two-finger scrolling working well.

The tablet also supports USB thumb drive storage and peripherals such as a wireless mouse using a wireless dongle.

While the tablet comes with a custom set of applications and Notion Ink plans to release an SDK for developer to write new apps, it does not currently ship with the Android Market since the tablet doesn’t meet Google’s specifications. It’s possible Android Market access might come after Google releases Honeycomb, an upcoming version of Android which will be optimized for slates.

I’m still not clear on why it took Notion Ink about a week to put this video together, but it’s definitely nice to see a finished production unit running the software that will be shipping with the Adam tablet. The Adam tablet is available for pre-order now, and the company says it should begin shipping in January.

Update: The company plans to release a new video every day showing off different features of the Adam tablet. You can check out the first and second videos after the break. The software is definitely intriguing, but I’m looking forward to seeing how stock Android apps run on the Adam Tablet. I think a lot of people were expecting a product with excellent specs which can run mainstream Android applications — which the Adam probably can, but right now the company seems to be primarily showing off its custom software.