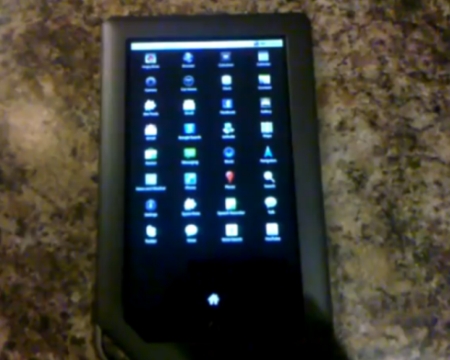 Barnes & Noble may be positioning the NOOKcolor as an eBook reader, but it’s shaping up to be a pretty versatile Android tablet for $250. Earlier this week, we saw the first third party apps make their way onto a rooted NOOKcolor, and yesterday Barnes & Noble released the official software developer kit so that programmers can write third party apps you’ll be able to install without rooting. Now we’re seeing what looks like the first custom ROM (or possibly just a tweaked version of the custom firmware) for the device.

The eBook reader ships with a version of Android 2.1 with custom software running on top so that you normally won’t see the standard Android elements such as the stock Home Screen or program launcher.

The hacked NOOKcolor shows both of those things and more… including a phone icon, even though the tablet doesn’t actually have the proper hardware to make phone calls. Clearly, this is still a work in progress… but it’s pretty cool stuff.

The NOOKcolor, by the way, has an 800MHz TI OMAP processor, 512MB of RAM, and a 1024 x 600 pixel capacitive touchscreen display, which makes it one of the most powerful Android tablets you can find for under $250.