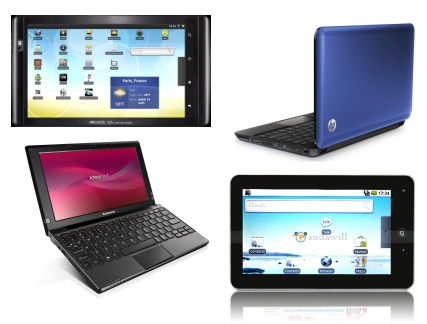 As the year draws to a close, it seems like as good a time to look back and see some of the changes in the mobile computing space. While netbooks were hot news in 2008 and 2009, 2010 largely became the year of the tablet — or rather the year of the iPad and dozens of other companies promising to take on the iPad with only a few (such as Samsung and Archos) actually managing to bring products to market during the calendar year.

What’s happening in the tablet space looks a lot like what happened in the cheap ultraportable laptop space a few years ago. Tablet computers have been around for well over 10 years — but they were bulky and expensive. Not many people really used them. The Eee PC showed in 2007 that there was a huge demand for low power, cheap, and tiny notebooks. The iPad has shown… well, it’s not really clear what the iPad has shown yet, but plenty of companies are hoping to take advantage of its success by launching similar products. It remains to be seen how those devices will fare in the market.

Anyway, without further ado, here are the most visited Liliputing posts from 2010:

You may notice a few themes. Posts about tablets and cheap devices were popular. Also, many of the most popular posts were written in January — right around the time of the Consumer Electronics Show, which is kind of like the Super Bowl of new product launches. Oh yeah, and CES 2011 starts next week and I’ll be in Vegas again for the show, so stay tuned for much, much more.

5 replies on “Most popular Liliputing posts of 2010”