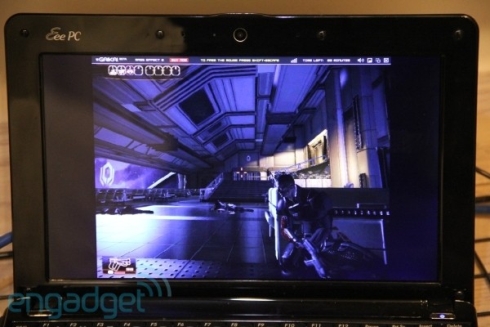 Netbooks and other low power computers make surprisingly decent gaming machines if you’re cool with playing older games or recent games that don’t require quad-core CPUs and 1GHz graphics processors. Unfortunately a lot of the best games do require more serious hardware, along with higher resolution displays, which you would think would rule out a netbook with an Intel Atom chip and a 10 inch display. But it turns out there are ways to play these games on virtually any computer with a fast internet connection.

A company called OnLive has been offering a streaming game service for a while. You can sign up for a free account and then pay to play a game. You don’t need to walk into a store to buy your game, or even download it to your computer. A remote server actually does all the heavy lifting, and just streams the game to your computer at 720p resolutions.

Today OnLive also announced a new $9.99 per month subscription plan that will let you play older or independent video games for one flat rate.

Engadget also got the scoop on another company called Gaikai which will begin offering a similar service soon. The difference is that Gaikai charges game publishers, not end users. The idea is that you can demo the game without downloading or purchasing it. So the service sort of acts like an advertisement for the full game, allowing you to play for a limited period of time.

In both cases, you’re likely to experience a bit of latency, depending on your internet connection, since every time you pull a trigger, try to jump, or perform another action your request is relayed through the internet to a remote computer rather than just running from your joystick to the computer or game console in front of you. Engadget reports that Gaikai games are playable, but a little less responsive than you’d like — but that should be good enough to let you know whether you want to buy a game.

It should also be good enough to help you kill a few minutes on your netbook by playing a game you never though it could handle.