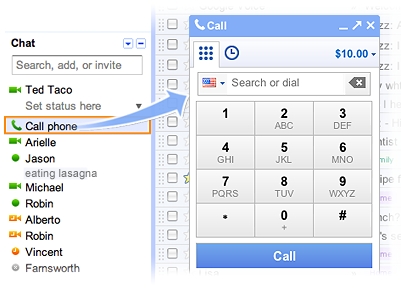 A few months ago Google added the ability to make phone calls from your computer to a telephone number from within Gmail. Just install the voice and video chat plugin, hit the Call phone button in your chat sidebar, and dial the number you want to call (and make sure you have a mic and/or headset connected to your phone).

You can also pay for Google Voice credit to make calls to international numbers with rates ranging from around 2 cents per minute to $0.98 (for calls to Guantanamo Bay). Actually, the most expensive calls you can make are $6.90 per minute to call an Immarsat satellite phone. Sending a page to a number in the Netherlands will run you $2.29… but really, calls to most locations  are pretty competitively priced