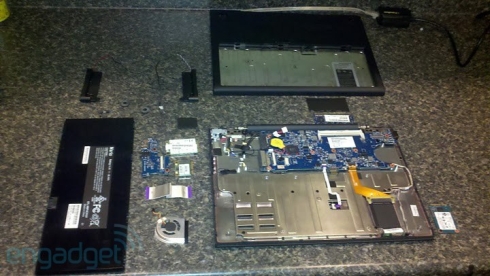 Sure, the Google Cr-48 laptop is a device for early adopters who want to test Chrome OS, not the general public. But aren’t you a little curios to know what it looks like under the hood? Apparently you’re not alone, because Engadget has published a series of photos from a user who received the laptop yesterday and then promptly proceeded to rip the thing to shreds (or rather, to methodically strip it down to get a better look at its individual components.

The photos do help fill in a few details that Google has been vague on. The laptop has a 16GB solid state disk, for instance, and what appears to be a 56Whr battery, as well as the usual laptop goodies including wireless modules

The computer has a 56.4 Whr battery, wireleess modules, and a small fan to help dissipate heat buildup (although with a low power Atom processor and a solid state disk instead of a hard drive, the Cr-48 should hopefully generate less heat than a typical 12 inch notebook).