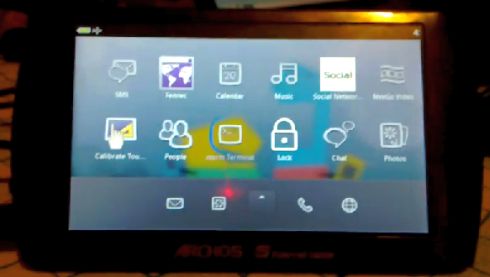 The Archos 5 Internet Tablet runs Google Android, has a 5 inch, 800 x 480 pixel display and an 800MHz ARM-based processor. Out of the box it can handle a wide range of audio and video formats, and with a little work, you can even install the Google Android Market on it. But the Archos 5 is stuck with Android 1.6 for now, and it’s not clear of Archos will ever update the software to let you run newer versions of the operating system since the company is now pushing a new line of “generation 8” tablets running Android 2.2.

I wouldn’t be surprised if hackers figure out a way to upgrade the OS on their own… but it looks like the Archos 5 isn’t just limited to Android. Tomasz Sterna has uploaded a video showing an Archos 5 Internet Tablet running MeeGo Linux. More specifically, it’s running the smartphone version of MeeGo which, as we’ve seen before, runs particularly well on tablet computers.

You can check out the video after the break. Right now, Sterna describes it as a “basic adaptation” of MeeGo, and it looks like not everything works — but I wouldn’t expect some functions, like say, the phone dialer to work on the Archos 5 since it doesn’t have phone capabilities.

It’s a bit early to say whether MeeGo or other open source operating systems will be able to keep older tablets like the Archos 5 useful long after the expiration dates of their original software. But it’s certainly nice to see that users might have the option of swapping operating systems, much the way that installing a light weight Linux distribution can bring new life to an older PC designed to run Windows 95.