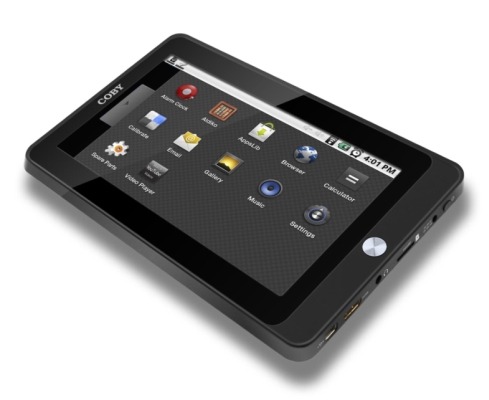 Coby has launched its second Android tablet in the US market, and to be honest, the new Kyros MID7015 looks an awful lot like the Kyros 7005 which started shipping last month. The main difference seems to be that the new version has some sort of directional pad on the right side, where the Kyros 7005 has Home, Back, and Menu buttons. I have no idea where those buttons are on the Kyros 7015.

Spec-wise, the tablet has an 800MHz Telechips TTC8902 processor, 4GB of storage, a 7 inch, 800 x 480 pixel resistive touchscreen display and 802.11b/g WiFi. It runs Google Android 2.1 and can support 720p and 1080p HD video in supported formats. It even has an HDMI output for displaying HD video on a larger screen, as well as an SD card slot for expansion.

If those specs don’t sound that exciting, that’s because this isn’t exactly a top of the line tablet… it’s a budget tablet. While it has a suggested retail price of $250, you can already pick one up from Amazon for $180