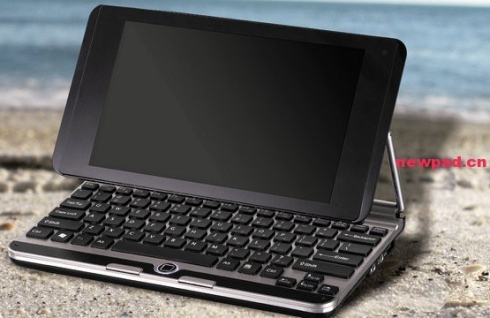 The folks at NewPad have found a Chinese computer that also has a screen that flips back to let you convert from laptop to tablet mode, but it’s not exactly a Dell Duo clone, because the whole lid flips, not just the display.

This isn’t a completely new idea. In fact, the Chinese notebook looks more like a Vadem Clio than a Dell Inspiron Duo. But it’s been years since I’ve seen anyone use this distinctive design.

The new computer features an 8.9 inch, 1024 x 600 pixel capacitive touchscreen display, a 1.66GHz Intel Atom N450 CPU, 1GB of RAM and a 120GB hard drive. It has a 3000mAh battery and runs Windows 7. There’s an SD card slot, Ethernet, VGA, USB and mic jacks, as well as a webcam and a series of buttons along the hinge that let you adjust the volume, toggle the WiFi, and perform other tasks quickly in tablet mode.

Unfortunately I doubt we’ll see this little guy outside of China anytime soon.

You can find more details and photos at NewPad.

via Engadget and MIC Gadget

One reply on “Chinese netbook takes interesting road to tablethood”