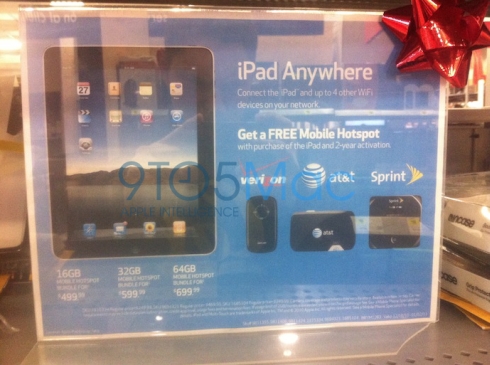 Up until recently US customers who wanted to pick up an Apple iPad had few choices: They could get a WiFi-only model or a 3G model which worked only on AT&T’s network. The Verizon figured out that it could sell the WiFi iPad with a Verizon MiFi mobile hotspot, which essentially provides you a way to get online from anywhere with Verizon’s 3G coverage — you just need to carry two devices instead of one (and deal with the fact that the Ipad has a 10 hour battery while the MiFi battery is good for closer to 4 hours).

Now Best Buy is getting in on the action, but offering WiFi-only iPads for $499.99 and up bundles with free mobile hotspots from Verizon, Sprint, or AT&T. Sure, you could just buy your own iPad and mobile hotspot and use the iPad on any network, but Verizon charges $629.99 for a 16GB iPad with a MiFi, while Best Buy is offering the same deal for $130 less.

You’ll still need to pay for a monthly data plan to use that free mobile hotspot, and it’s only free when you sign up for a 2-year service plan, but as an added bonus, the mobile hotspot isn’t tied to the iPad. You can also use it to get your laptop, gaming console, or any other WiFi-enabled device online.