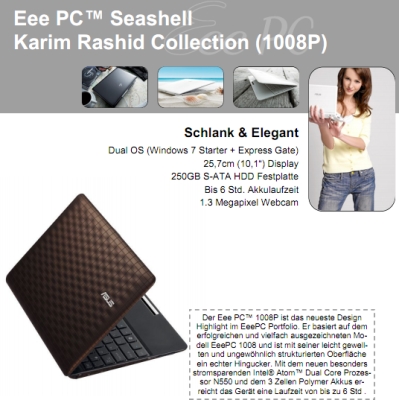 While Asus, like most PC makers, is expected to unveil a new line of netbooks and other computers at CES next month, the company currently appears to be going through its current lineup and offering a few spec bumps here and there. The folks at NetbookNews.de noticed that the Eee PC 1008P, for instance, has been upgraded with a dual core Atom processor — in Germany, at least.

In the US the Eee PC 1008P Karim Rashid Edition (with a designer lid) is still shipping with a single core 1.66GHz Intel Atom N450 processor, but Amazon Germany is selling the netbook with an Intel Atom N550 dual core chip.

There’s no word on whether the dual core model will be available in the US, although Asus already offers several dual core netbooks in the States, including the Asus Eee PC 1015PN and Eee PC 1015PEM.