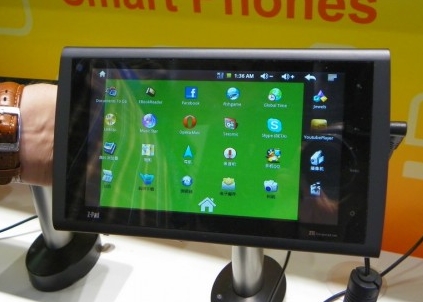 Peter got a chance to check out the V9 at a recent event, and also spotted a new ZTE 7 inch tablet called the Z-Pad. Like the V9, the Z-Pad has a 7 inch, 800 x 480 pixel resistive toucshcreen display and runs Google Android 2.1. It also has Bluetooth, WiFi, and GPS. But what makes the Z-Pad different is the fact that it’s reportedly using a dual core Rockchip processor, a Mali GPU, and G-sensor.

The Z-Pad looks a little sluggish to me, but it’s always tough to judge a system based on the demo model on display at a trade show, since it’s probably been handled and futzed with by a number of people.

You can check out videos of both tablets in action after the break.