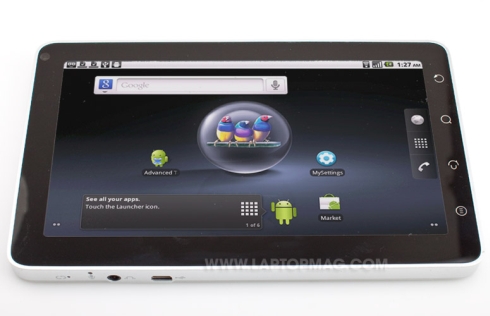 The folks at Laptop Magazine have posted a detailed review of the ViewSonic ViewPad 7, an Android tablet due out in mid-December. Starting at $459, this little guy is a lot pricier than some of the cheap Chinese tablets that have been flooding discount stores in recent months. But it has some premium features that make it a bit more competitive with high-end tablets like the Samsung Galaxy Tab.

The Viewpad 7 has a 7 inch, 800 x 380 pixel capacitive touchscreen display, a 600MHz ARM-based CPU and runs Google Android 2.2. If you insert a SIM card it can even make calls and surf the web over 3G, although it’s not expected to be bundled with a 3G plan and sold by wireless carriers in the US. The 3G modem supports GSM and WCDMA networks and you can use SIM cards from AT&T and T-Mobile.

Laptop Magazine seemed reasonably happy with the build quality, but points out that the machine has a lower resolution display than the Samsung Galaxy Tab, and a slower processor as well. The reviewer says it felt relatively snappy, but lagged far behind the Galaxy Tab and newer phones like the T-Mobile G2 in benchmarks.

On the bright side, the ViewPad 7 has full access to the Android Market, and because it has a phone-like 800 x 480 pixel screen, you shouldn’t have any problems finding apps that scale properly to the display.

It sounds like the ViewPad 7 might be a decent alternative to the Galaxy Tab for anyone looking for something a bit cheaper… at least until the WiFi-only Galaxy Tab is available.