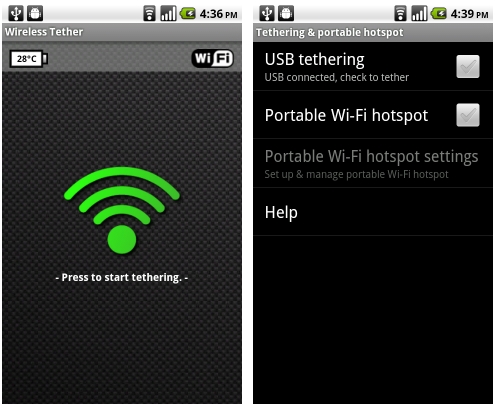 As expected, T-Mobile is about to start charging $14.99 per month for the ability to tether your smartphone to your laptop so that you can surf the web with a computer using your phone as a modem. Some T-Mobile customers have been doing this for free since Google rolled out USB tethering and WiFi hotspot support in Android 2.2 earlier this year.

T-Mobile won’t be offering any new features or larger data transfer caps when the “Tethering and Wi-Fi Sharing” option kicks in on Sunday, November 14th. The company will just start charging you extra to connect your phone to your computer.

But here’s a little secret: T-Mobile only knows that you’re sharing your data connection if you use the built-in tethering capabilities of Android or other operating system. Most third party tethering apps don’t differentiate between data going straight to your phone and data being passed through your phone to a computer.

Here are a few options Android users can use to tether a computer to a phone without using the tethering capabilities built into Android 2.2. For the most part the free apps are only available for users with rooted phones, but even the paid apps will pretty much pay for themsleves in a month or two if you don’t want to pay $14.99 per month for tethering acces.

If you’re looking for a quick and easy way to root your Android phone, you might want to check out z4root, SuperOneClick, or Samsung Galaxy S One-Click Root, Unrevoked, or Universal Androot. Between those 5 apps you should be able to root most Android phones released in the last year or two. Keep in mind, rooting your phone may void your warranty or cause problems. If that happens, you’re pretty much on your own (although there are plenty of user forums where you may be able to find help.

I should also point out that T-Mobile and other carriers will still likely cut off or slow down your data transfers after you hit whatever monthly cap is assigned to your account. And if you suddenly start downloading far more data on your plan than you had been doing previously, don’t be surprised if your wireless carrier decides you’re violating the terms of your plan and slaps you with some sort of penalty. So use these workarounds with caution.

6 replies on “Time to root your T-Mobile phone, $14.99 tethering fee kicks in this weekend”