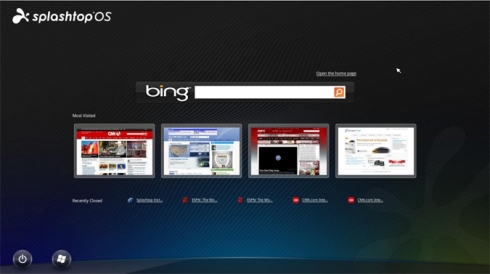 Splashtop has been cranking out a light weight operating system for netbooks and larger notebooks for a few years. The idea is that PC makers can customize and load Splashtop software on a computer alongside Windows, giving you a choice of booting into Windows or Splashtop when you hit the power button. The advantage of booting Splashtop is that the OS tends to load in 10 seconds or less, letting you surf the web, listen to music, chat over Skype, or perform other actions without waiting for Windows to load.

Up until now the only way to get Splashtop has been to buy a computer with the software preloaded. But now the company has begun testing a new version of its software called Splashtop OS, which anyone can download and install on a Windows computer.

The installer is just 2MB, and once installed, you’ll be able to boot into an even lighter version of Splashtop which basically runs one app: A web browser. While older versions of Splashtop used a Mozilla-based browser, Splashtop OS beta uses Google Chrome. And that’s pretty much it.

The OS is supposed to boot in about 5 seconds, while taking a few more seconds to connect to a wireless network.

Right now Splashtop has only been tested with a handful of HP laptops including the HP Mini 110 and 220 netbooks and several Pavilion dm and dv-series notebooks. When I tried installing Splashtop OS on my Asus laptop, I got an error message telling me that I didn’t have a supported model and I should check back in a few weeks. Your results may vary.

If you have a supported notebook you can download the app from os.splashtop.com. Or you can just check out the brief demo video after the break.