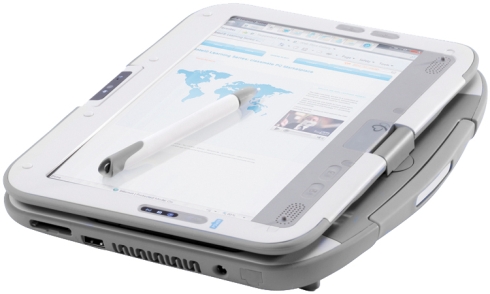 PeeWee PC has launched a new portable computer that can function as a touchscreen tablet or a netbook. The PeeWee Pivot 2.0 Tablet Laptop appears to be based on the latest version of Intel’s Classmate PC reference design, which explains why it looks so much like the Toshiba CM1 or the CTL 2Go Convertible Classmate PC NL2 which I reviewed earlier this year.

The PeeWee Pivot features a 10.1 inch resistive touchscreen display which can be folded down over the keyboard for use in tablet mode. The standard model comes with a 1024 x 600 pixel screen, but a higher resolution 1366 x 768 display option is also available.

The computer has a 1.66GHz Intel Atom N450 CPU, a 160GB hard drive,and 1GB of RAM (which can be upgraded to 2GB). It supports 802.11b/g/n WiFi and Bluetooth connectivity. There’s an accelerometer for automatic screen rotation.

The computer is aimed at children, and has some classroom (and out-of-classroom) friendly features including a water resistant keyboard, a built in handle for easy carrying, and a semi-rugged case which can withstand drops of about 20 inches.

The Pivot runs about $599 with Windows 7 Starter, which is a bit higher than the $534 that CTL charges for the NL2 — but the CTL version is on backorder, while the Pivot 2.0 appears to be in stock.

One reply on “PeeWee PC launches the Pivot 2.0 convertible tablet for students”