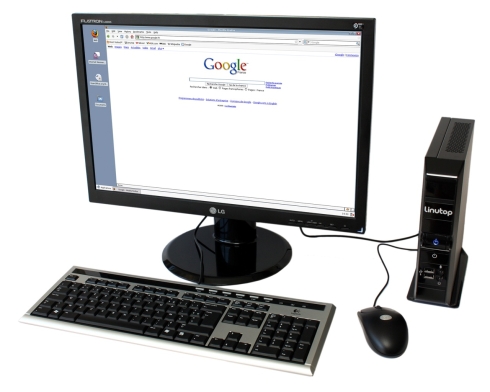 Last time I checked in with the folks at Linutop, they had launched a Linux-based mini-desktop with a low power VIA C7 processor. Now it looks like the company has released an updated model called the Linutop 3 which swaps out the VIA chip for a 1.6GHz Intel Atom processor.

The Linutop 3 isn’t exactly using bleeding edge components. It has an Atom N270 CPU, which is a single core chip that was first introduced in 2008, but it should still provide a little more power than the VIA chip that preceded it. The computer supports up to 2GB of RAM, and comes with 2GB of Flash storage.

Probably the most distinctive aspect of the computer is it’s fanless design, which means it should be virtually silent while operating (unless you use a noisy hard drive).

The nettop measures 9″ x 9″ x 2″ and comes with the Linutop Linux-based operating system, which is based on Ubuntu. It runs OpenOffice.org, Firefox, VLC, and other software. It sells for 340 Euros, or about $443. For that price you could probably put together your own, more powerful Linux-based nettop from spare parts. But it’s always nice to have the option to pay someone else to do it for you.