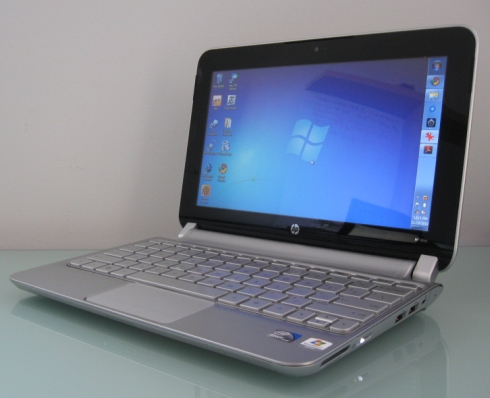 HP has an annoying habit of releasing different notebooks unde the same model number. So while I reviewed an HP Mini 210 earlier this year, here I am reviewing the HP Mini 210 again.

One obvious difference is that I reviewed the Mini 210 HD previously, which had a 1366 x 768 pixel 720p HD display, while the latest unit HP sent me to review has a standard 1024 x 600 pixel display. But the new model has also has a refreshed case design.

Overall, the new model isn’t different enough from older HP Mini 210 netbooks for anyone to ditch their old mini-laptop and pull out their credit cards for a new one.

But there are a few notable differences between the HP Mini 210 that was launched early this year and the version launched in late 2010, and those are the areas that I’ll focus on in this brief review.

The new version of the HP Mini 210 differs from older models in a few key ways. First, the mini-notebook has been redesigned so that a 6 cell battery sits flush with the back of the computer. In fact, there’s no longer a 3 cell battery option.

If you want extra juice, you can purchase an extra 6 cell battery from HP when you configure your laptop.

Since the battery sits flush with the back of the laptop, there’s nothing preventing you from tilting the screen way back, and HP has designed the hinge so that you can open the Mini 210 up almost to a 180 degree angle.

You can still remove the base panel of the computer to access the RAM, hard drive, PCIe card slots, and other internals without a screwdriver. In fact, while I had a bit of difficulty removing the bottom of the HP Mini 210 HD earlier this year, the new model is much easier to open up. 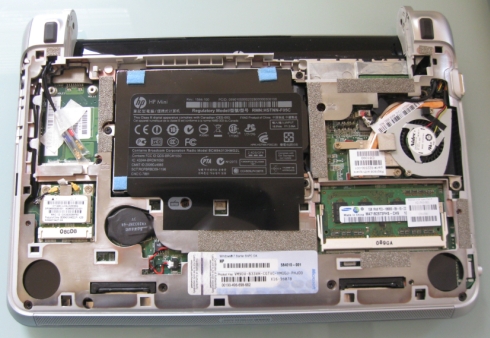 Just pop out the battery, press the orange tab, and peel off the entire sheet of plastic covering the bottom of the computer. It snaps back on just as easily. 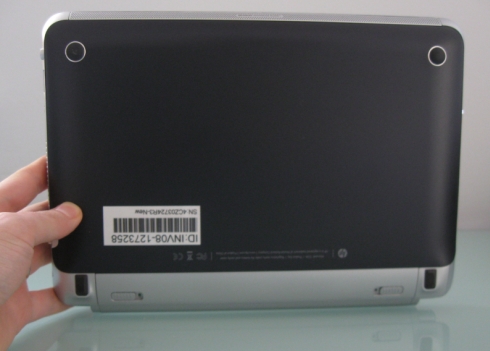 Like the original HP Mini 210, the new model uses the same color for the lid and base plate, while the keyboard, touchpad, and display areas are a different color. The laptop is available with black, blue, red, pink, and purple lids, while the screen bezel is black and the sides and keyboard area are metallic gray.

The lid and base now have a matte finish — unlike the display. 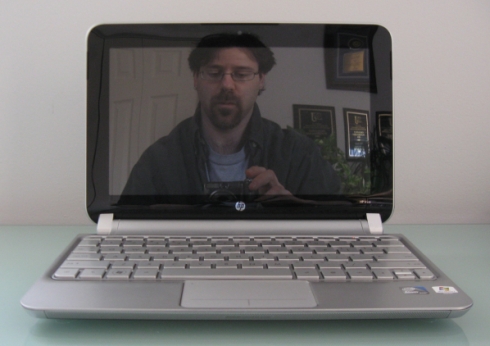 The display area features a glossy edge-to-edge sheet of glass, which gives the screen a bright, attractive look — until you start to smudge the black bezel with fingerprints. The screen is also very reflective, so while it’s easy to use in low-light settings, it reflects a bit of glare in bright lighting.

Around the sides of the netbook you’ll find a VGA port, 3 USB 2.0 ports, a flash card reader, an Ethernet jack (hidden behind a door), key lock port, and a single audio jack for a mic and/or headphone. The power switch is also located on the side of the laptop.

The touchpad features an all-in-one design, with the left and right buttons built right into the touchpad. While I’m generally not a huge fan of this design, HP makes some of the best touchpads of this style of any PC maker. 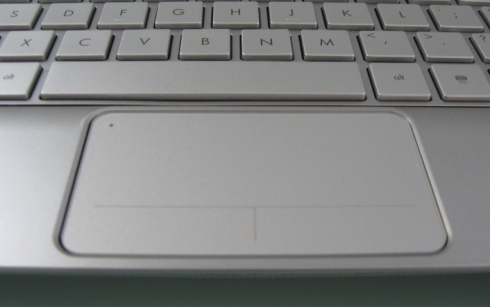 I didn’t have any major problems clicking and dragging, or using multitouch gestures such as pinch-to-zoom, or two-finger scrolling. I personally still found the computer easier to use with a USB travel mouse, but that’s probably just a matter of taste.

The keyboard is a bit of a mixed bag. On the one hand, the island-style keyboard layout provides a decent amount of surface area for each key and just enough space in between keys to make touch-typing quite pleasant.

There’s a bit of flex toward the center of the keyboard, but not enough to be noticeable if you aren’t looking for it. Overall I found the experience of typing on the new HP Mini 210 to be quite pleasant — with one major exception. 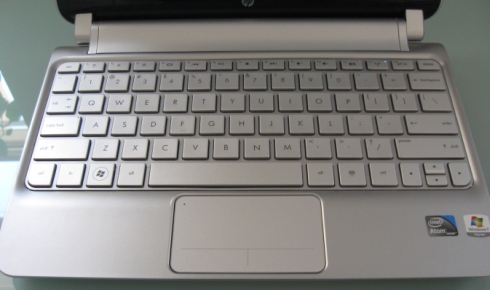 There don’t appear to be any Page Up, Page Down, Home or End buttons. Most netbook keyboards are too small to provide dedicated keys for these functions, so you trigger them by holding Fn plus another key — usually the arrow keys. But pressing Fn and the arrow keys on the HP Mini 210 doesn’t accomplish anything special, and none of the keys on the keyboard are labeled with these functions.

I don’t think I realized how heavily I typically rely on those keys until I started typing on a keyboard without them. I have to spend a lot more time using the touchpad or mouse to move the cursor around when I can’t simply skip to the beginning or end of a line using the Home and End keys.

HP also set up the keyboard so that the default behavior for the Fn keys at the the top is actually to work as special keys. Instead of pressing Fn + F11 for mute, for instance, you simply press F11. If you actually want to trigger the F11 function (to go full screen in a web browser, for example), then you hold down the Fn key while pressing F11.

The new HP Mini 210 comes with a number of configuration options that can affect performance. HP sent me one of the cheapest models available, with a 1.66GHz Intel atom N455 CPU, 1GB of DDR3 memory, a 250GB, 7200RPM hard drive, and no video acceleration features. 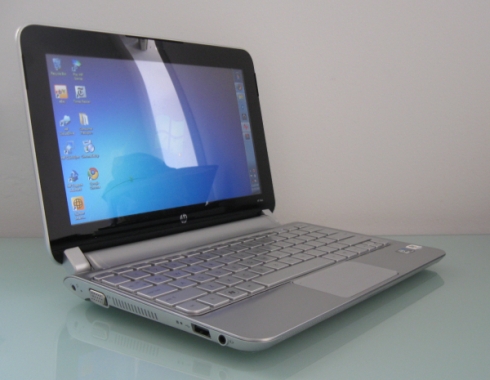 That said, this $339 laptop felt pretty snappy and I had no problems surfing the web with 8 or more browser tabs open, doing some light image editing, watching (standard definition) Flash video, or listening to music. It’s hard to say whether the 7200RPM hard drive made any real difference, but even though the HP Mini 210 has the same CPU as several other computers I’ve tested this year, it definitely felt like one of the more responsive models.

The upgrade options are nice to have, but of course each incremental upgrade will add to the price. Still, if you want an HD display, or the ability to watch HD videos, you might want to look at the higher end configuration options.

One thing that’s a bit strange is that HP doesn’t offer the Atom N550 dual core processor without the Broadcom Crystal HD video accelerator. Intel has stated (and I have confirmed) that most netbooks with Atom N550 chips should be able to handle 720p HD video playback without any graphics acceleration, so it seems a bit silly that HP only offers this option with the Broadcom card.

On the other hand, an Atom N550 chip isn’t really powerful enough to decode 1080p video without some help, so the Broadcom card can come in handy for higher resolution videos. Using the Broadcom card instead of the CPU to decode HD videos should also help reduce CPU use and prolong battery life a bit.

I’ve been testing a lot of computers with 5 to 6 hour batteries recently, and I’d almost forgotten what a difference a few hours can make. The HP Mini 210 comes with a 6 cell, 66Whr  battery, which in my test appears to be good for up to 8.5 hours of fairly heavy usage.

I turned on the computer at the start of a work day and then used it pretty heavily for about 7 hours to surf the web, do research, watch videos, write blog posts, and send emails. By the time I had to pack it up and go, Windows was reporting that the battery was still about 20% charged.

I’ve learned to distrust these Windows reports, since they tend to exaggerate a bit, but I’d be surprised if I couldn’t get at least 8 hours of run time out of this laptop under similar circumstances.

Of course watching videos, playing games, or viewing Adobe Flash-heavy web sites will probably reduce your battery life, while using the laptop with WiFi turned off may give you a little extra time. Your results may vary.

All in all, while the HP Mini 210 may not provide the longest battery life of any netbook on the market today, it’s good enough that most people can probably feel safe leaving the power cable at home when taking the netbook to a coffee shop for a few hours.

The HP Mini 210 is a solid option for anyone looking for a relatively inexpensive 10 inch netbook offering decent performance. It has a few features that you won’t find from most netbooks, including a base panel that can be removed without a screwdriver, a 7200RPM hard drive, and a colorful case with a matching lid and base panel. 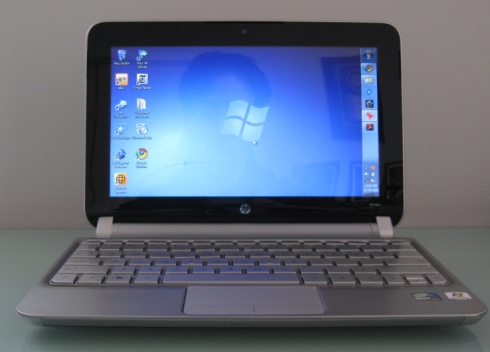 The netbook is also one of the most configurable consumer-centric mini-laptops available, with Atom N455, N475, and N550 options, as well as an optional HD display, optional 3G, and an optional Broadcom HD video accelerator.

On the other hand, HP has made some baffling decisions, such as producing a keyboard without any Home, End, Page Up and Page Down keys and a touchpad which makes it physically impossible to press the left and right buttons simultaneously.

If you can get past the quirks though, the HP Mini 210 is a solid machine with decent performance and excellent battery life.