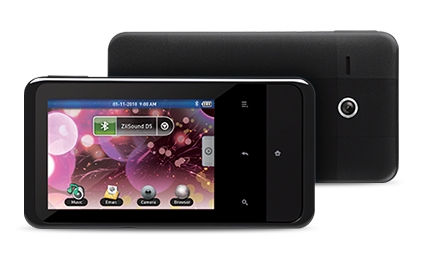 Companies have been pumping out handheld portable media players that can play movies and music for ages. But the iPod touch changed the game a few years ago thanks to its support for thousands of third party apps from the App Store. It’s more like a portable computer that happens to be a decent audio and video player to boot. Up until recently there wasn’t really anything else out there that filled the same niche.

Then Archos came along with its line of portable Android devices. Samsung is expected to release the Galaxy Player soon, which is basically a Samsung smartphone without the phone. And now Creative is getting in on the action with the Zen Touch 2.

The Creative Zen Touch 2 will come in two flavors. The top of the line model has GPS, a digital compass, and an FM Radio, while the cheaper model lacks those features. But here’s what you get with either model:

The Zen Touch 2 can support a wide range of audio and video formats including H.264, WMV, MPEG4, MP3, AAC, WMA, FLAC, and OGG Vorbis. The company promises up to 25 hours of run time while listening to music or 5 hours while watching video.

All three models are due out in December. You can find some hands-on photos at Pocket Lint.