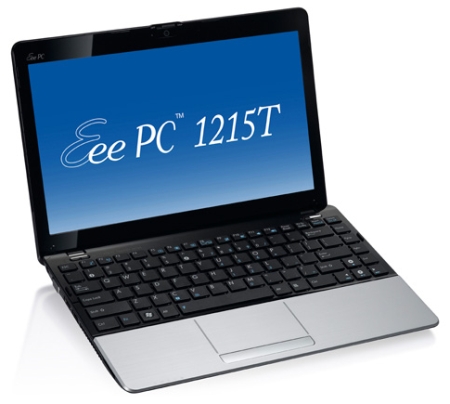 The Eee PC 1215T looks like most other 12 inch notebooks from Asus, which is to say it has a chiclet-style keyboard with flat keys and spaces between them, a nice wide touchpad with a single button below it, and a curved case design which is wider in the back than the front. The notebook has a glossy HD display and HDMI and VGA output. It runs Windows 7 Home Premium and has 2GB of RAM and a 320GB hard drive.

What makes the Eee PC 1215T different from most other notebook from Asus are the AMD processor and ATI graphics. While I haven’t tested this model specifically, I can say that based on my experience the ATI K125 CPU offers roughly twice the performance of an Intel Atom N450 chip while the ATI Radeon HD 4200 series graphics chips offer 3D and HD video capabilities that are similar to first generation NVIDIA ION graphics. Not bad for a notebook 3.2 pound notebook that’s selling for $436 at Amazon

. There’s no word on the battery life though.