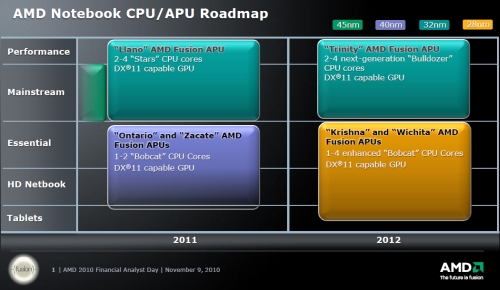 AMD hasn’t exactly been shy about letting us know about upcoming chips lately, but now the company has gone all out and released a couple of roadmaps showing its plans for Server, desktop, and notebook chips through 2012.

In the low power and mobile space, it looks like the upcoming “Bobcat” core will continue to play a role for the next few years. The first Bobcat chips will include the upcoming Ontario and Zacate chips we told you about earlier this week. But in 2012 AMD plans to launch new chips named Krishna and Wichita which will have 1-4 Bobcat CPU cores.

Each and every chip will also be bundled with a graphics processing element which can handle DirectX 11 and HD video. AMD calls the new chips with CPU and GPU components APUs, for Accelerated Processing Unit. It’s all part of the company’s new Fusion platform.

Krishna and Wichita chips will be the first APUs built with a 28nm process. These chips will be used in tablets, notebooks, netbooks, and small form-factor desktops and all-in-one PCs.

Of course, AMD’s not only releasing low power chips. The company has a number of new bleeding edge chips in the works, including the Komodo which will feature 8 next-gen Bulldozer CPU cores.