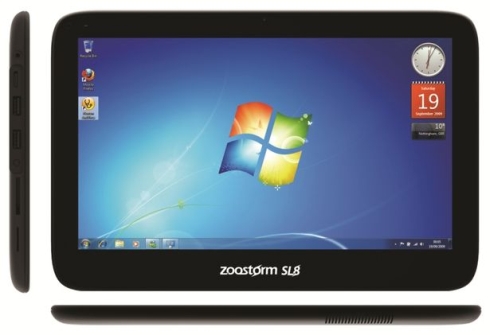 The Zoostorm SL8 is an upcoming Windows tablet that bears a more than passing resemblance to a certain German tablet. It’s not clear if the SL8 and the Neofonie WeTab are manufactured by the same company, but both have 11.6 inch touchscreen displays and 1.66GHz Intel Atom processors.

The main difference is that Zoostorm will ship the SL8 with Windows 7, while the WeTab ships with MeeGo Linux.

The Zoostorm slate PC will have 2GB of RAM and a 32GB solid state disk. It also has 802.11b/g/n WiFi, optional 3G, a few USB ports, and a mini-HDMI port (although it’s not clear whether the computer will actually be able to handle HD video playback with its integrated graphics chip).

Zoostorm plans to start shipping the SL8 in the UK on December 1st. It will run Windows 7 Professional and sell for £499. There will also be a 3G capable model for £579.