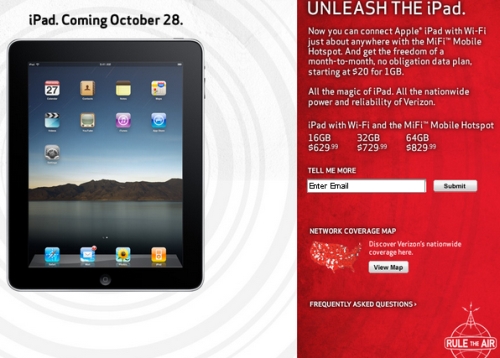 While the world (or at least people in America with poor AT&T reception) wait with baited breath for Verizon or any other wireless carrier to start offering the iPhone, the mobile phone company has a related announcement that’s a little bit out of left field: Starting in two weeks you’ll be able ot pick up the Apple iPad from Verizon stores around the US.

Here’s where it gets interesting: Verizon uses a different 3G mobile broadband technology than AT&T, but rather than retool the internal workings of the iPad to work on Verizon’s network Verizon will offer the WiFi version of the iPad plus a MiFi 2200 mobile wireless hotspot. That means you’ll need to turn on the MiFi in order to get online with the iPad when you’re not near a WiFi access point. But it also means that you can use the the MiFi with the iPad, a laptop, a smartphone, or another mobile wireless device.

You can also purchase the iPad without a MiFi from Verizon, but you’ll only get the WiFi models which run between $499.99 and $699.99.

Verizon has put up a web site for the iPad, but its probably getting hammered with traffic because I had to hit refresh a number of times to get it to load properly.

Verizon is also expected to offer the Samsung Galaxy Tab 7 inch Android tablet later this year, as well as a number of other slates running Google Android and other operating systems.

AT&T is also expected to start offering the iPad in retail stores on October 28th. Right now it’s only available in the US through Apple.