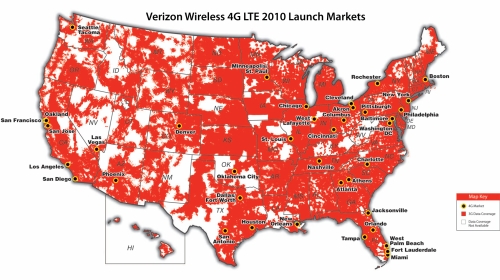 Verizon has announced plans to begin rolling out its 4G LTE service in 38 major American cities by the end of the year. Verizon’s LTE network will also be available in 62 commercial airports — including airports outside of the launch cities.

Among the launch cities will be New York, Philadelphia, Boston, and Washington DC on the east coast, Los Angeles, San Francisco, Phoenix, and Seattle in the west, with a few cities in Florida, Texas, Ohio, Oklahoma, Indiana, Missouri, and other states thrown in for good measure. You can find a full list of cities and airports in the press release, or just check out the map above (Note that red patches represent 3G coverage, while black dots show 4G spots).

Verizon says its LTE network will offer faster speeds and less latency than its current 3G mobile broadband offering. The company expects download speeds to average between 5 and 12Mbps while upload speeds should be 2 to 5Mbps.