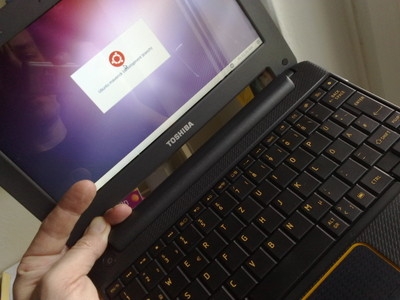 Canonical just launched Ubuntu 10.10 RC. Chippy from CarryPad happens to have an NVIDIA Tegra 2 powered Toshiba AC100 smartbook at the moment. See where this is going yet?

While the AC100 ships with Google’s Android operating system, the hardware can support other operating systems as well — just not Windows, which isn’t designed to run on ARM-based chips. So Chippy decided to see if he could figure out how to install Ubuntu 10.10 on the smartbook, and long story short, it almost works.

Chippy was able to get to the boot screen, but no further. But the folks who put together a custom Ubuntu image for the Toshiba AC100 reports that if you can get the system to boot, most things should be working. There’s no sound driver yet, and the touchpad may have some issues. But it sounds like that’s about it for the known issues at this point.

Of course, Ubuntu 10.10 won’t officially be launched until next week, so we’re still in the early days of AC100/Ubuntu 10.10 hacking. I suspect things will only get better and easier from here on out.

Update: Chippy managed to get the OS up and running and he’s posted some initial impressions at Carrypad.